Grand Hotel Agra is owned and managed by Dang Family who possess sixty years of vast experience in the Hospitality Industry. They also own Ranjit Hotel, which is the first good Class & Budget Hotel from Agra Cantt Railway station consisting of 30 well furnished rooms.

Grand Hotel was the first classified hotel by Tourist Department, Government of India and has a good Brand name in the city. The strength of our brand is evidenced, in part, by superior ratings received from our hotel guests and from leading publications. The Grand being one of the oldest hotels of Agra is a prominent structure in the city of Taj, which graciously combines old world charm with modern luxury and has consistently maintained its significant presence in the hospitality industry. Recently, huge amount has been invested to upgrade the product and to maintain the Colonial Character.

Grand Hotel has a very interesting history. The building was built in early nineties by Baptist Missionary Society Corporation and was handed over to Soldier & Christian Association Trust on 9th March 1928.

Army Scriptures Readers and Soldiers Friend Society handed over the entire property to Sheikh Fida Hussain who was the resident of Sadar Bazaar Agra, on 14th April 1943.

Mr. Ranjit Rai Dang who had migrated from Sangla Hill area of district Shekhupura (situated now in Pakistan) after partition, on 1st April 1948 took the property from Sheikh Fida Hussain known as ?Soldier Home? but ran as ?Grand Hotel? on monthly rent value of Rs. 350. This hotel was run by Mr. F. Fremji a parsi gentleman at that time.

Grand Hotel was then a property of 12 rooms consisting of four general commodes system toilet. One Soda Factory was located in the north west side of the hotel.

Owner of the property Mr. Fida Hussain died on 6th August 1952, and his wife Mrs. Jamila Khatoon with the consent of her three brother-in-laws in order to honor the last wish of her husband sold out the property to Mr. Ranjit Rai Dang on 20th November 1954. Total land was 1.409 Acre, out of which built up area was 0.927 Acre.

Ministry of Defence in 1958-59 decided to acquire the surplus land of property for army use, but later on listening to the appeal dropped the idea and executed a commercial lease under Schedule VIII as per rule 28(i). Building was leased out in favour of Mr.Ranjit Rai Dang for a lease of 90 years on the 18th day of February 1969.

Hotel underwent construction, renovation, addition and alteration several times. In 1946, construction plan was sanctioned but due to non-availability of building raw materials, because of great Second World War, sanction of the plan could not materialize. Later on plans were sanctioned in 1971 to 1981, 1982 to 1983, 1985 and 1993 to 1997.

First Classification Committee formed under the Ministry of Tourism, the Government of India classified the hotel in 1961 as Two Star and in 1990 the hotel was upgraded from Two Star to Three Star Category. 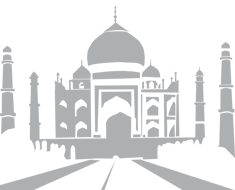